I can’t remember much of the last couple of weeks. My mind flows with thoughts about my trip to South by South West (SXSW) this past weekend. For those of you who don’t know, SXSW is a film, interactive, and music festival in Austin, Texas.

This year, I spent my time in the interactive portion of the event. I was caught up in the Gaming Expo and absorbed by the Marvel panels. We were able to chat with actor Clark Gregg over Skype. We even got to watch a scene from the “Captain America: The Winter Soldier” movie. 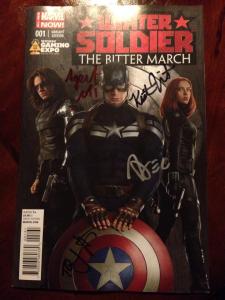 I got a signed copy of an exclusive “Winter Soldier” comic cover variant. Only 300 copies were printed, and I held one in my hands. I’m a lucky girl!

I also found the Doctor’s TARDIS. He wasn’t at the event, but he has a valid excuse. He was out there saving the world!

New video games, 3D printers, and robots surrounded us. Gaming characters were everywhere. I even saw Wall-E! Although I almost realized it too late, I learned to tread lightly. Facing the Grim Reaper was terrifying. Try to avoid him as much as possible. :p

We went to the “Game of Thrones” exhibit. The line was long and rain poured on us, but we were determined to see it. As I sat on the Iron Throne, I realized the wait was worth it!

I visited two of my favorite restaurants, Madam Mam’s Thai Cuisine and Hula Hut. Oh, how I’ve missed some good Austin food, and it was nice to get my fix.

Also, you can’t visit Austin and not go to Toy Joy. This mom-and-pop toy store sells your classic board games to the craziest gags you’d probably never imagine. It’s one of the things that makes Austin so unique. I’m going to miss that place once it is gone.

We went to see Mondo’s “Nothing’s Impossible” gallery. Disney posters filled the room, and it was very difficult not to purchase every single print. As we took a walk by the Colorado River, I was reminded again why Austin is so great! Random artwork decorated the bridge and streets everywhere.

SXSW was wonderful as usual, and I can’t wait to see what next year will bring!

About me? I’m never good at these things, but here are the basics. I’m a journalism and film graduate from the University of Texas at Austin. I'm a dedicated digital content nerd with over eight years of experience in digital content management, content writing, copy editing, and project management. Currently, I'm a staff writer for The American Genius, and I manage my personal blog that advocates for epilepsy awareness. I LOVE to bake! I like to challenge myself to learn new decorating and baking techniques. And although I’d love to say I’ve mastered everything and have never burnt a dessert, it simply isn’t true. View more posts